Photos of the CAMP Memorial Day Activities have been posted on our website. You may view them by clicking on the image below. 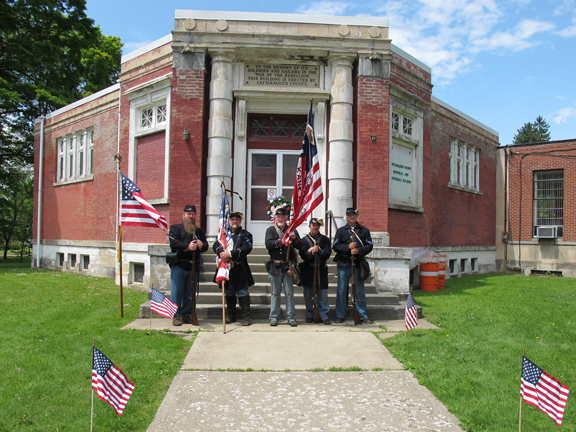 May 28th, 2015, Exclusively for cattcomemorial.com by John Scarano, CAMP Webmaster

Citizens Advocating Memorial Preservation (CAMP) held its first Memorial Day Ceremony at the entrance to the Cattaraugus County Memorial and Historical Building at 11:30 AM on May 25, 2015. The grass roots organization also marked its first appearance in the Little Valley Memorial Day Parade.

A 5-man group of Civil War re-enactors from NY and Pennsylvania marched as an Honor Guard for CAMP in the annual parade. They were flanked front and rear by banner-carriers bearing banners asking for the community’s support in CAMP’s Memorial Building preservation effort. The re-enactors were Mark Lovelace for the 154th New York Volunteers, Chuck Copello, Bill Robertson, Doug Foster and John Stengel, all re-enactors for the 42nd Pennsylvania Regiment.

Several CAMPers, as CAMP members prefer to be called, canvassed the crowd of parade watchers who walked beside the Little Valley parade as it progressed down Court Street. They passed out brochures that detailed the plight of the Memorial Building and stopped to speak to many people who expressed interest in CAMP’s cause.

In the meantime, CAMPers, who manned a small booth near the entrance to the Memorial Building, engaged many parade watchers in conversation about the plight of an extremely historic building as they passed by it. (To date, CAMP is not aware of any other New York Civil War Buildings that are entirely dedicated to Civil War veterans.) Many of the inquiring passersby gladly signed a petition asking for the preservation of the Memorial Building.

A small crowd formed slowly as the start time for CAMP’s ceremony approached and numbered more than 50 individuals by the time the CAMP ceremony was scheduled to start. CAMP Chairman, Thomas Stetz, started the ceremony on time at 11:30 AM with his opening remarks.

When his opening remarks were finished, Mr. Stetz called for anyone in the audience who was a military veteran to identify themselves by raising their hands. One-by-one each of the several veterans present then identified themselves, their military branch and their military service. The audience applauded each veteran as they finished each of their brief speeches.

After recognizing the veterans present and veterans of all American Wars, Mr. Stetz led the crowd in reciting the Pledge of Allegiance with assistance by Noah Fuller, a boy scout from Little Valley who has a Cattaraugus County Civil War ancestor, Captain Henry A. E. Fuller. The pledge was followed by a stirring speech from Civil War Re-Enactor and CAMP member, John Stengel.

Mr. Stengel’s speech was followed by an impromptu speech by Retired Major Richard Williams of Salamanca, NY.  Major Williams spoke about his concern for the remembrance of Civil War veterans and of all United States military veterans. He also related a poignant story about a father and son who were killed in the same battle.

Major Williams was followed by Carl Edwards, Cattaruagus County Legislator for District 8. In his short and heartfelt speech he urged his colleagues to give CAMP enough time to study the Memorial Building and raise funds to preserve it.

Next, Mr. Stetz asked the crowd if there was anyone present who wanted to remember their Civil War ancestor. One-by-one again, many Civil War descendants from Cattaraugus County and beyond stood voluntarily before the crowd and announced with pride the details of their ancestor’s Civil War Service. A somber air fell over the crowd as they discovered how young many of the Civil War Soldiers and Sailors were when they gave their life for their country over 150 years ago.

The Remembrance section of the ceremony was followed by a recitation of his original poem, Brave Men with Tears, by Clark Casler of nearby Jamestown, NY. Mr. Casler wrote the poem specifically for the Memorial Building. He received a great deal of applause from the crowd as he concluded his reading.

Another somber moment followed as Gail Bellamy, dressed as a GAR Widow, and Honor Guard re-enactor, John Stengel, walked the length of the sidewalk leading up to the steps of the Memorial Building. Ms. Bellamy carried a Memorial Day Wreath in one hand. They were flanked by the remaining 4 members of the Honor Guard who stood at attention in two’s at opposite sides of the short flight of stairs that leads to the Memorial Building’s entrance. Together Bellamy and Stengel climbed the steps and placed the wreath on a stand at the front door in honor of all Civil War and other United States military veterans.

All said and done, it was a very fruitful day for CAMP as they were successful in drawing needed attention to the service of over 3,500 Civil Veterans from Cattaraugus County, New York. And, also, for the need to preserve an important part of Cattaraugus County’s history.

(Click Image to Enlarge Photo. Use Your Browser’s Back Button to Return to This Page.) 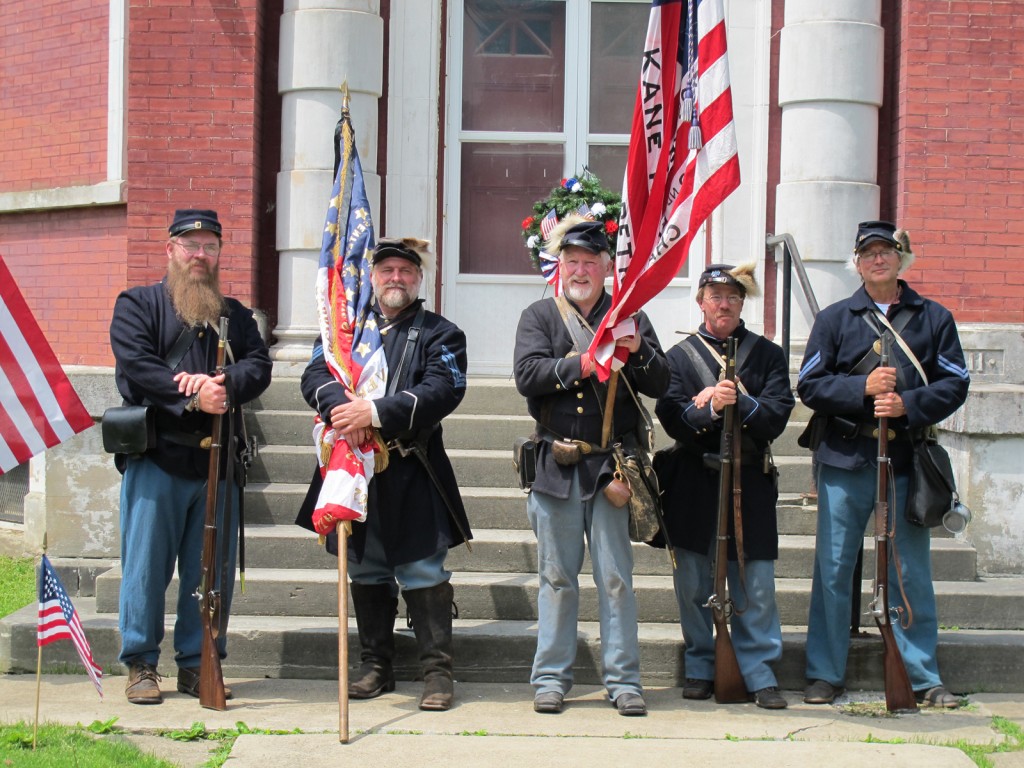 Citizens Advocating Memorial Preservation (CAMP) will be holding a Memorial Day ceremony on May 25, 2015 at the Cattaraugus County Memorial and Historical Building, located at the corner of Court Street and Seventh Street in the Village of Little Valley, NY.

This brief ceremony will start at 11:30 am following the Little Valley Memorial Day parade and cemetery ceremonies. Appropriate Memorial Day speeches and comments will be made with Civil War re-enactors as an Honor Guard. A wreath will be placed at the Memorial to honor the Civil War soldiers and sailors from Cattaraugus County to which this Memorial Building was dedicated in 1914.

Everyone is invited to join CAMP at this ceremony to honor the memory of the 3,500 brave Cattaraugus County Civil War veterans who fought in the War Of The Rebellion to preserve the Union. 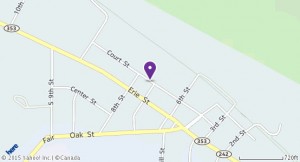 Use Your Browser’s Back Button to Return to This Page