There is plenty of room on this page for a picture and/or service record of your Cattaraugus County Civil War ancestor. Email your image and a short service record, together with your name and residence, to CAMP at: webmaster@cattcomemorial.com Need help with sending the image or with the service record? Please ask. We may be able to help! Is your Civil War ancestor pictured in the Memorial Building Dedication Photo? Let us know that, too! Right click on the images to enlarge them and use your browse back button to return to this page. 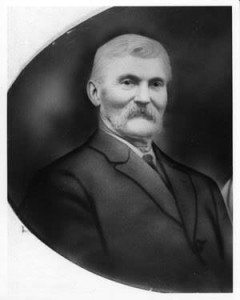 Pvt. Hiram Keith. Co. H, 154th Regt., N.Y.S. Vol. Inf. A native of Ashtabula, Ohio, he enlisted at age 21 at South Valley and was mustered out with the regiment at the close of the war. In the postwar years he lived in Steamburg and near Randolph, where he was a member of D. T. Wiggins Post, No. 297, Grand Army of the Republic (the largest Union veterans’ organization). He died in Steamburg in 1923 and is buried in the cemetery there. Dunkelman and Winey Collection, St. Bonaventure University, courtesy of Alfred Keith. 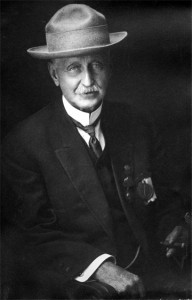 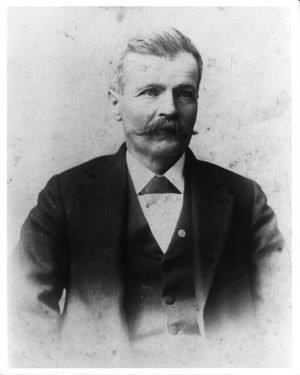 Pvt. Augustus V. Laing, Co. I, 37th N.Y.S. Vol. Inf. and Co. H, 154th Regt. N.Y.S. Vol. Inf. He enlisted at Ellicottville in May 1861, in the 37th New York and was mustered out with the regiment on June 22, 1863, at New York City. He subsequently enlisted for a second time at Buffalo in September 1864 and served in the 154th, being mustered out with the regiment in June 1865. He died in Little Valley in 1923 and is buried in Eddyville Cemetery, Mansfield. Dunkelman and Winey Collection, St. Bonaventure University, courtesy of David C. Laing. 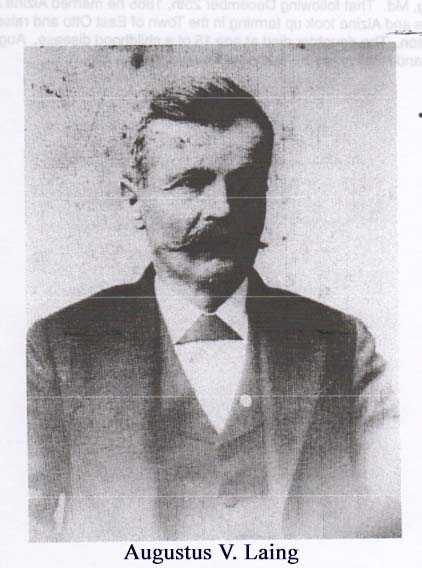 Augustus V. Laing was born February 6, 1837 in Buffalo, NY to the parents of William and Jane Laing. In 1838 his family moved to Boston, NY where William took up farming. In 1845 his father moved to the Town of East Otto to a new farm where Augustus grew to manhood. When the Civil War started Augustus enlisted May, 1861 in the 37th New York Volunteer Infantry and was discharged June 22, 1863 after serving 2 years. After a year at home he enlisted again on September 15, 1864 in Company “H” of the 154th New York Volunteer Infantry. He joined the Regiment in Atlanta and served as a teamster and blacksmith. He was discharged with the Regiment June 11, 1865 in Bladensburg, MD. That following December 25th, 1865 he married Alzina A Courter of East Otto. Augustus and Alzina took up farming in the Town of East Otto and raised 2 children, a daughter and a son. The daughter died at the age of 15 of a childhood disease. Augustus passed away May 21, 1923 and is buried in the Eddyville Cemetery, Eddyville, NY. Courtesy of Charles R. Pettit 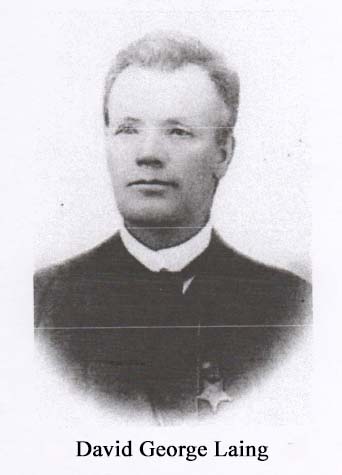 David George Laing was born January 6, 1835 in the Town of Collins, Erie County to the parents of William and Jane Laing. The Laing family were farmers in the Town of Collins. David George Laing enlisted in the Town of Allegany, NY on May 15, 1862 as a Private in the 37th New York Volunteer Infantry. He was wounded in the hip and ankle may 5th, 1862 in an engagement near Williamsburg, VA. He was discharged December 31, 1862 from a hospital in Philadelphia, PA for disability. He returned home and married Mary Eliza Stone of the town of Mansfield, Cattaraugus County May 24, 1863. They had one daughter born February 18, 1865. Mary Eliza died March 3, 1865, a little over 2 weeks later. David remarried in 1869 to Rhoda Scofield of Nashville, Chautauqua County. David George passed away January 6, 1909 in Lakewood, NY. His grave site is unknown. Courtesy of Charles R. Pettit

Theodore A. Laing was born on November 30, 1843 in the Town of Boston, NY to the parents of William and Jane Laing. He grew up on the family farm, first in Boston and later in East Otto in Cattaraugus County. Prior to going in the service he was employed as a farm laborer in a farm in Wyoming County. At the age of 18 he enlisted on May 15, 1862 at Allegany, NY as a Private in Company “H” 37th New York Volunteer Infantry. He was wounded twice in the ankle and the hip in a battle outside of Williamsburg, VA. The 37th Regiment was positioned on the left flank of Hooker’s Division and were hit hard by Longstreet’s Division. Theodore was discharged for disability from Saterlee Hospital in Philadelphia, PA December 31, 1862. Theodore returned home to fully recover from his wounds and then went back to work for his previous employer on the Wyoming farm. In a few short years he was employed as a farm laborer near Bradford, PA. It was here that he met and married in Olean, NY Miss Eliza A. Kessler, formerly of Cochection, NY. There were no children from this marriage. He lived his life on a farm outside of Bradford and passed away May 15, 1914 and is buried in the Sawyer Cemetery, Sawyer City, PA. Courtesy of Charles R. Pettit 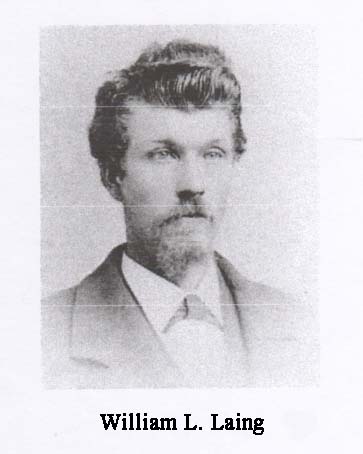 William L. Laing was born January 5, 1846 in the Town of Boston, NY to the parents of William and Jane Laing. At an early age in 1848 his parents moved to East Otto, NY to a new farm. It was in this area that William L. grew to manhood and at the age of 18 he enlisted on September 27, 1864 in Company “H” of the New York Volunteer Infantry. He joined the rest of the Regiment in Atlanta and served with his Regiment until the end of the war and was discharged on June 25, 1865 at Bladensburg, MD. In 1849 he married Mary Eighme of Hamburg, NY. William and Mary took up farming in the Town of Eden area. They raised one son to adulthood. William passed away June 25, 1917 in Eden and is buried in the Evergreen Cemetery in Eden, NY. 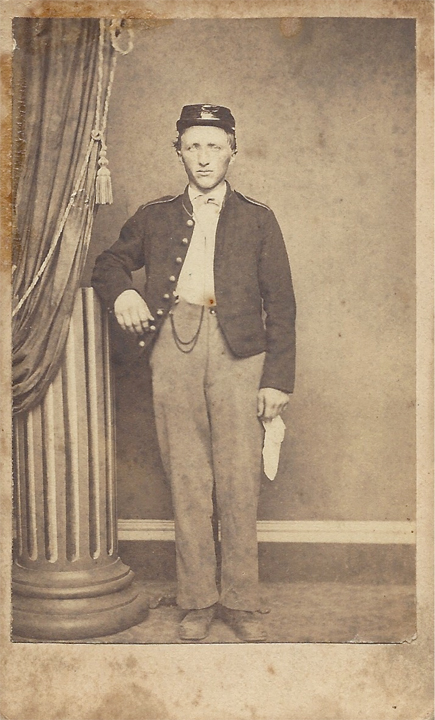 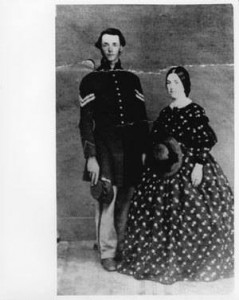 Corporal Philo A. Markham, Company B, 154th Regt., N.Y.S. Vol. Inf. He enlisted at Dayton at age 25 and was captured at Gettysburg. After being paroled in December 1863, he was wounded in the right arm at the battle of Dug Gap on Rocky Face Ridge, Georgia, on May 8, 1864. Later that day his arm was amputated by the 154th’s surgeon, Henry Van Aernam. Markham was discharged on October 31, 1864. He received the brevet rank of first lieutenant from the State of New York for his meritorious service. He died in 1932 and is buried in Dayton’s Markham Cemetery. Pictured standing in military uniform with his wife, Julia Blackney Markham. Dunkelman and Winey Collection, St. Bonaventure University, courtesy of Charles Markham. 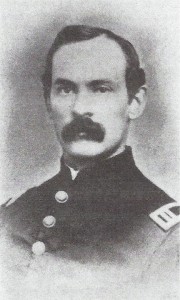 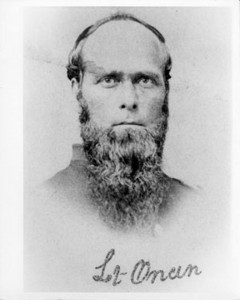 2nd Lt. Warren Onan, Co. C, 154th Regt., N.Y.S. Vol. Inf. A native of Lancaster, Pennsylvania, Onan was engaged in the lumber business along the Allegheny River at the outbreak of the war. He spent most of his service as chief of the brigade ambulance corps, serving until the war’s end. He lived in Allegany in the postwar years until 1879, when he moved to Minnesota and, briefly, North Dakota. He died in Moorhead, Minnesota, in 1910 and is buried there in Prairie Home Cemetery. Dunkelman and Winey Collection, St. Bonaventure University, courtesy of William C. Welch.