CAMP historian, Mark Dunkelman, has posted an article on the New York History Blog about the proposed demolition of the Cattaraugus County Memorial and Historical Building. It is entitled, “An Imperiled Civil War Memorial”. Visit Memorial Building in the News on the CAMP web site to read it.

Citizens Advocating Memorial Preservation (CAMP) members attended the 11 AM Veterans Day ceremony held by the Little Valley American Legion Post #531 at the Little Valley Rural Cemetery in Little Valley, NY. The solemn ceremony was well-attended by the public despite the inclement weather conditions. The ceremony was officiated by Allie Burdick, a member of American Legion Post #531. Color Guards were present from Post 531 and were joined by a Civil War re-enactor Color Guard representing the CAMP organization.

Immediately following the ceremony at the cemetery, CAMP held their own Veterans Day ceremony at the steps of the Cattaraugus County Memorial and Historical Building located a few blocks down Court Street. They were joined by American Legion members and spectators. The ceremony was officiated by CAMP Chairman Tom Stetz.  Pastor Nate Lange of the Little Valley Methodist Church provided the opening and closing prayers for the event.

CAMPers, John Stengel and Tom Place were part of a 5-man re-enactor Civil War Color Guard present during the ceremony. They were joined by another re-enactor, Steve Teeft, who is the executive director of the Echoes Through Time museum in Springville and a representative of the Sons of Union Veterans.

Several members of the audience spoke in rememberance of their veteran descendants. CAMPer, Nancy Barger, noted that a Mr. Bishop, who is a World War II veteran, honored CAMP by his presence at the ceremony. Mr. Teeft honored his Civil War descendant and spoke about the importance of the Memorial Building as a lasting memorial to all those brave Americans who gave their lives and their service for their country during the Civil War.

A video of the entire ceremony can be viewed on this web site’s Video page: 2015 CAMP Veterans Day Ceremony 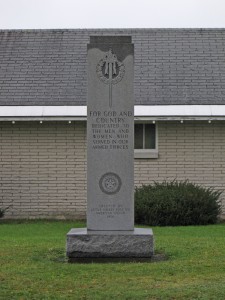 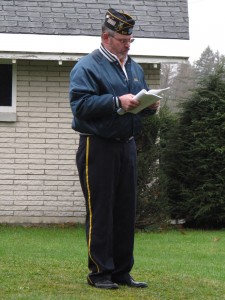 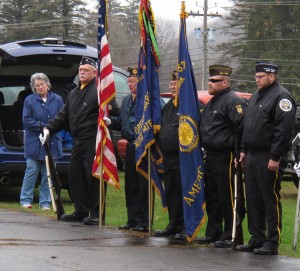 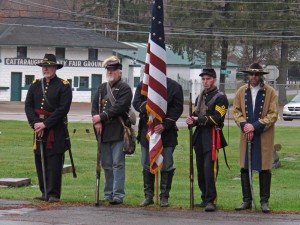 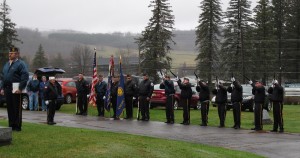 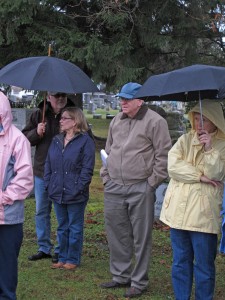 CAMPer, Clark Casler at the Am Legion Vets Day ceremony. 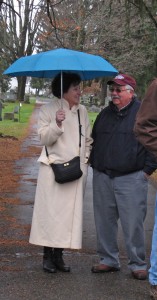 CAMPer Nancy Bargar and Chairman, Tom Stetz, waiting for the Am Legion ceremony to begin.

CAMP members held a ceremony that honored all veterans at the Cattaraugus County Memorial and Historical Building on Veterans Day, November 11, 2015. The Olean Times Herald published an article about the ceremony on November 12, 2015. Please go to the Memorial in the News page of this web site to read the article.

Immediately following the Cemetery Ceremony, CAMP will hold a brief ceremony at the Cattaraugus County Memorial and Historical Building located at the corner of Court and Seventh St. in Little Valley. The public is encouraged to attend both ceremonies.

CAMP’S ceremony will include:

3) Reading of the Clark Casler poem

4) Any other appropriate remarks anyone in attendance cares to make.

An Honor Guard of 3-4 Uniformed Civil War re-enactors will also be present.