The additional support came in the form of a letter addressed to the county legislative chairman that came from American Legion County Commander, George Filgrove. The letter was read into the county meeting minutes by American Legion representative, John Sampson, in front of all attending legislators, CAMP Chairman, Thomas Stetz and CAMP member, Gail Bellamy.

Mr. Sampson’s delivery was well-punctuated by his organization’s obvious passion for the preservation of the Cattaruagus County Memorial and Historical building located on Court Street across from the county complex in Little Valley, New York.

Please see the Olean Times-Herald article that covers the delivery of Mr. Sampson’s speech on our web site at: Memorial Building in the News

A copy of the letter that was addressed to Legislative Chairman, Norman Marsh, appears below: 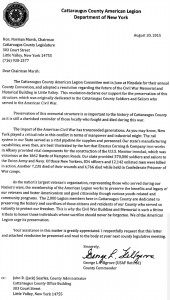 This 2015 Cattaraugus County Fair note comes from our CAMP Chairman who attended the CAMP fair booth every day from August 3rd to August 9th, 2015:

“I was at the CAMP Exhibit/informational table everyday of the 2015 Cattaraugus County Fair, Aug. 3-9. Information about CAMP’S preservation and restoration efforts for the Cattaraugus County Memorial and Historical Building, located at the corner of Court and 7th streets in the Village of Little Valley, NY was made available to Fair goers from 10 am to 10 pm each day of the Fair. The following CAMPERS worked the booth at different times during the Fair: Tom Stetz, Mark & Annette Dunkelman, Juanita & Jim Ried, Cyndy Whited, Warren Patterson, John Stengel, Nancy Bargar, Gretchen Gaede, Clark Casler, Gail Bellamy, Rosemary Carvella, Deb Everts, Doug Wilson, and Tom & Johnathan Place.

CAMPERS handed out brochures and talked to Fair goers about the History and present status of the endangered Civil War Memorial and the County’s plans for its demolition. I talked with many Cattaraugus County residents as well as many people from other counties, states and even Canada who were at the Fair spending their money in Cattaraugus County. Most were unaware of the County’s plans for demolition of the Memorial building and almost everyone expressed disbelief that the County was considering demolition and asked WHY. I had no answer for their WHY and most stated that our history needs to be preserved. Almost 700 people signed petition sheets in favor of Cattaraugus County preserving the Memorial.

Fair goers offered suggestions for future use of the Memorial Complex Area, volunteered their help in areas that they were experienced and made monetary donations towards CAMP’S efforts.

My best experiences of the Fair came one afternoon when a young girl about 13 stopped by and talked for about 1/2 hour. She was from Fairport, NY and was visiting her grandparents who live in Little Valley, as she does every summer at Fair time. She talked, acted and dressed much older than 13 and expressed her interest in history and preserving it, especially that connected to the Civil War time period. She said she was “into the fashion of that time period” and enjoyed making period clothes and was trying to connect with a “living history group” to live her passion. Talking to her made my day and I did not think anyone could top her enthusiasm for history but I was wrong. About an hour later, two young cousins about the age of 10 stopped by, one girl and one boy. They leaned on the table with their elbows and started firing questions at me about the exhibit and why I was there. I couldn’t answer their questions before they asked several more and they were all excellent questions and questions I did not expect from such young kids. They both lived in Little Valley and knew where the Memorial was located and walk by it many times but really did not know anything about it. Between questions they were kidding with each other and having a great day. When they ran out of questions, they both reached into their pockets and emptied them onto the table and then each picked up a dollar and started to put them into the donation chest. I told them they did not have to make a donation but could just sign our support petition. They both said NO, stuffed their dollars into the chest, signed the petition and said history is important, good luck and ran off. I hope there are more kids like these three, we just have to reach them. They made my FAIR WEEK.

Another note from a CAMP member who manned the CAMP booth at the 2015 Cattaraugus County Fair:

“Plenty of visitors to the Cattaraugus County Fair passed by CAMP’s table without giving it a glance. But of those who stopped to look at the displays and engaged in conversation, virtually all were moved to sign our petition. Some folks were aware that the Memorial and Historical Building is endangered; others were not. Some were Cattaraugus County residents; others were not. I asked all of them to sign the petition, regardless of where they live. We have heard that much of the opposition to the County’s plan to demolish the Memorial comes from outsiders—people who live elsewhere than Cattaraugus County.To me, that fact demonstrates that the fate of the Memorial transcends the County’s boundaries, that its preservation is more than a strictly local issue.

Many visitors of a certain age fondly remembered when the Memorial housed the County Historical Museum and—going back even further—the Village of Little Valley Library. Many expressed hope that the Memorial will once again serve a useful purpose in its choice location in the County seat. 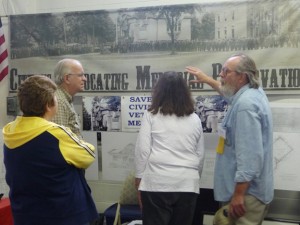 Citizens Advocating Memorial Preservation, CAMP, manned a booth at the 2015 Cattaraugus County Fair from August 3rd to August 9th. Their goal was to reach as many fair-goers as possible in order to make them aware of the planned demolition of the Cattaraugus County Memorial and Historical Building in Little Valley, NY.  The following is a reflection of one CAMP volunteer’s experience at the fair booth:

“My experience at the Catt. Co. Fair was very positive. It was easy to ask folks to sign the petition if they wanted to see the Memorial saved.  Many were unaware that it may be demolished and offered memories of visiting it, borrowing books and holding a gun that was used in the war. There was a disbelief that it would be gone.

I met Sharon Fellowes, who keeps the artifacts safe in Machias, and Legislator Ms. Vickerman and Legislator candidate, Mr. Boberg, who were patient with my reasons for wanting to keep this historical gem in Little Valley. Twice my blank sheets were taken by residents to get signatures for me.

The other volunteers were a joy to work with and the whole week was perfect weather.  A great deal of interest in our booth and also support for the cause.

Each time I was there, I drove past the Memorial standing proudly on its corner next to the park. Somehow it reminded me of an old soldier standing at full attention with uniform slightly tattered, but extremely proud to still be there. Perhaps someday we can see it put to good use again with maybe for veterans finding a place of information, assistance and comrades to talk to, read and have a cup of coffee.

The family of Gary Waid, who was a collector of Civil War books, magazines and a large puzzle gave me his collection and I am in the process of getting book plates in his memory. It would be great to have a reading room for the veterans and a place to hang out.   There must be many things this proud building could be used for if given half a chance.

I will post fair comments from CAMP Members separately as they come in!   John Scarano, CAMP Web Master