There is plenty of room on this page for a picture and/or service record of your Cattaraugus County Civil War ancestor. Email your image and a short service record, together with your name and residence, to CAMP at: [email protected] Need help with sending the image or with the service record? Please ask. We may be able to help! Is your Civil War ancestor pictured in the Memorial Building Dedication Photo? Let us know that, too! 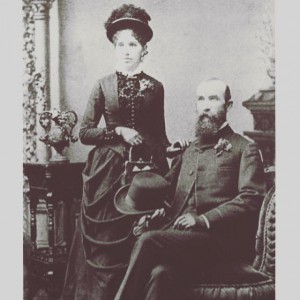 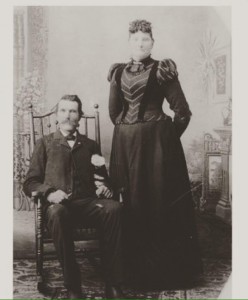 Corp. George Bassett, Co. D, 154th Regt., N.Y.S. Vol. Inf. Postwar image with his wife, Sophia McIntyre Bassett. Bassett enlisted at Yorkshire, was captured at Gettysburg, survived imprisonment, and was mustered out with the regiment at the war’s end. He died in Michigan in 1895.⠀ ⠀ Dunkelman and Winey Collection, St. Bonaventure University, courtesy of Steven C. Bassett.

Herbert Eugene Ballou was born February 25, 1843 in the Town of East Otto to the parents of David and Mary Ballou. His parents moved to the Town of Ashford when he was a child where they farmed. At the age of 18, on October 8, 1861 he enlisted as a Private in Company “A” of the 100th N.Y.V. I. in Springville, NY for a three- year enlistment. The 100th was formed up in the city of Buffalo. He was discharged January 30, 1865. From 1865 to 1876 he lived in Colden and Springfield engaged in the hotel business. He then moved to Ellicottville, NY where he undertook farming for a living. In 1885 he married Mary Elizabeth Fox of that village. Herbert and Mary had two children, a daughter and a son. The daughter, Caroline Barret Ballou, Merrit Johnson Pettit, a grandson of Joshua R. Pettit, a veteran of the 154th. Herbert passed away April 19, 1922 in Ellicottville, NY and is buried on the Sunset Hill Cemetery in that village.

Herbert had an older brother, Charles F. Ballou, who at the age of 22 enlisted on September of 1861 in the 44th N.Y.V. I. this no doubt was what prompted Herbert to enlist the next month. Charles was wounded during the morning of July 3, 1863 where his regiment was positioned on the west slope of Little Round Top at the battle of Gettysburg, Pa.

Frederick J. Bollow was born in Mecklenburg, Scherwin, Germany February 6, 1842 to the parents of Joseph and Dorothy Bollow. He came to America in 1855 with his family at the age of 13. As a young man he engaged in farming in the Town of Ashford, Cattaraugus County, NY. He enlisted July 31, 1862 in Company “B”, 154th N.Y.V. I. He was admitted to the Army Hospital in Alexandria, VA October 12, 1862 with chronic diarrhea and was discharged from service January 16, 1863. The 154th had been stationed at Camp Stewart in Alexandria and broke camp on October 12th and headed west along with the 134th Regiment. Frederick returned home and married Louise Dorothy Westendorf on August 2, 1887 and continued farming in the Ashford area. They raised five children, three daughters and two sons. Frederick passed away November13, 1912 and is buried in the Mount Hope Cemetery, West Valley, NY. One of his daughters, Emma Marie Bollow, married Justin Wilbur Pettit, a son of Joshua R. Pettit, a veteran of the 154th N.Y.V.I. 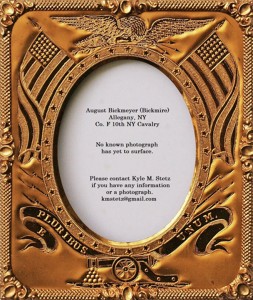 August Bickmeyer was born in Hanover Germany about 1823, emigrated to Canada, then to Gowanda, NY and by the late 1850s settled on a farm on the McClure Hollow Road in Allegany, NY. Family tradition states he was a substitute for another man (identity unknown) from Allegany, NY. He enlisted, September 10,1864 at Allegany; age 44 years; mustered in as private, Co. F, 10th New York Cavalry September 10, 1864, to serve one year; mustered out with detachment, June 3, 1865 at Alexandria, Va. Bickmeyer died in 1903 at the home of his daughter on West Green Street in Olean, NY where he had taken up residence. He is buried in the Allegany, NY (Protestant) Cemetery on Maple Avenue. 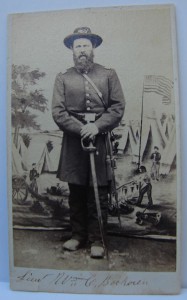 1st Lieutenant William C. Bockoven, Co. I 64th NYVI. From Allegany, NY. Bockoven was with the 64th NYVI from his enlistment in August of 1861 and saw action from the Peninsula Campaign of 1862– through the Siege of Petersburg until his mustering out in September of 1864. Bocken was a blacksmith after the war, and presumably before the war as well. From the Kyle Stetz Collection. 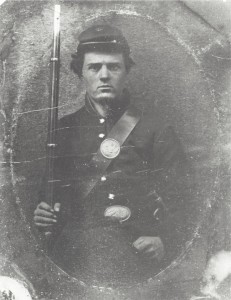 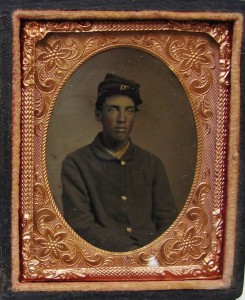 James M. Curtis Co. H 71st NYVI, from Franklinville, NY. Promoted to 2nd Lt. of the 71st NYVI. He is pictured here as member of 71st NYVI. As a member of the 71st NYVI he fought at the battle of Gettysburg near the famous Peach Orchard at the apex of Sickles’ 3rd Corps line on July 2, 1863. He was later Captain Co. A 188th NYVI which drew many men from Cattaraugus County. From the Kyle Stetz Collection. 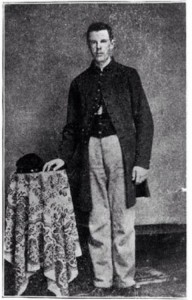 Sgt. Marcellus W. Darling, Co. K, 154th Regt., N.Y.S. Vol., Inf. He enlisted at Leon and served throughout the war, writing frequently to his family. In the postwar years he became a minister. Late in life he wrote a memoir, most of which was dedicated to his Civil War service. It included this photograph, “taken while convalescing from typhoid fever.” Darling died in 1913 and is buried in Sioux City, Iowa. His brother Delos Darling also served in Co. K and died of intermittent fever in January 1865 at Annapolis, Maryland.⠀ ⠀ Dunkelman and Winey Collection, St. Bonaventure University, courtesy of University of Iowa Libraries 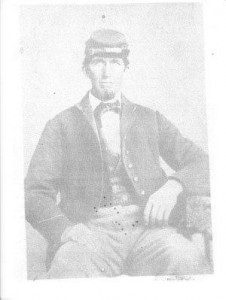