There is plenty of room on this page for a picture and/or service record of your Cattaraugus County Civil War ancestor. Email your image and a short service record, together with your name and residence, to CAMP at: webmaster@cattcomemorial.com Need help with sending the image or with the service record? Please ask. We may be able to help! Is your Civil War ancestor pictured in the Memorial Building Dedication Photo? Let us know that, too! 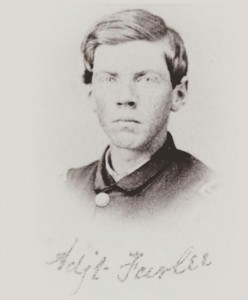 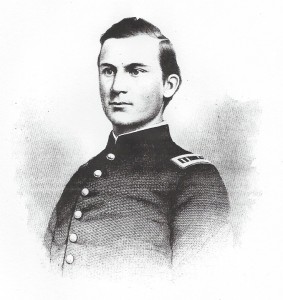 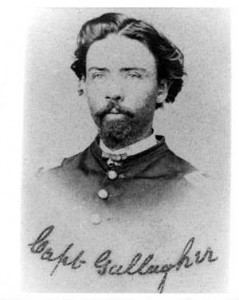 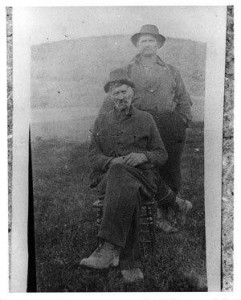 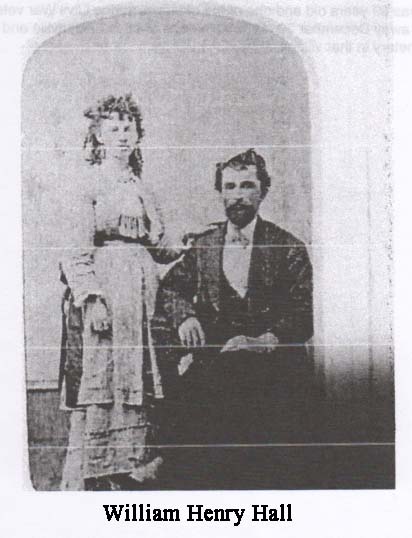 William Henry Hall was born August 19, 1843 in the State of Ohio to the parents of James and Melinda Hall. His father was employed as a lumberman and the family moved east to Pennsylvania and back out west to the Wisconsin Territory when William was young. His father died when he was about 10 years old so William was raised by relatives who brought him to Ellicottville, NY where as a teenager was employed as a lumberman. On August 16, 1864 he enlisted in Buffalo at the age of 19 years old in Company “C” of the 13th New York Heavy Artillery. He served until the end of the war and was discharged June 21, 1865 in Norfolk, VA. He returned to Ellicottville and married Hadessa Johnson on June 10, 1866. William and his family lived all their life in Ellicottville with the exception of living in East Otto and Allegany for short periods of time. They raised 3 sons to adulthood. When his wife, Hadessa, died in May of 1933 William was 89 years old and one of the oldest surviving Civil War veterans in the area. William passed away on December 30, 1935 at the age of 92 in Ellicottville and is buried in the Sunset Hill Cemetery in that village. Courtesy of Charles R. Pettit 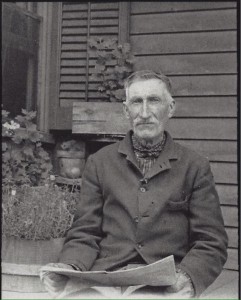 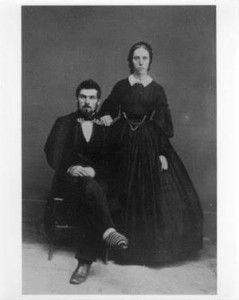 Sgt. Giles N. Johnson, Co. B, 154th Regt., N.Y.S. Vol. Inf. He enlisted at age 21 at Dayton and was wounded in the right foot at Gettysburg. His great toe and metatarsal were amputated by an unknown surgeon at an unknown hospital. Johnson was discharged for disability on June 10, 1864, at Washington, D.C. Soon after he returned home he posed with his wife, Ellen, for this photograph, a striped sock on his wounded foot. Dunkelman and Winey Collection, St. Bonaventure University, courtesy of Brinda Breese-Wederich. 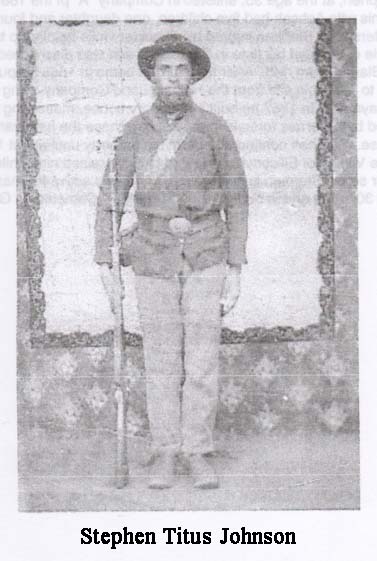 Stephen Titus Johnson was born April 4, 1829 in Granby, Oswego County, NY to the parents of Roswell and Mary Polly Johnson. Stephen was the seventh child of a family of eleven. He grew to manhood on the family farm and on September 3, 1854 je married Achsa Eunice Beals of Fulton, NY. In the winter of 1856 he and his wife and one child moved to the Town of Mansfield in Cattaraugus County and lived in a log cabin about a mile north of the Four Corners of Dublin Road on the present day Bedient Road. This cabin was near his brother Alfred and sister Rosanna and family. About 1860 he moved his family to a cabin he relocated to a one acre parcel of land north of the Chautauqua Road (present day Winsor Road). When Stephen, at the age of 35, enlisted in Company “A” of the 188th New York Volunteer Infantry September 26, 1864 he and his wife Acsah had five children, one daughter and four sons. During the siege of Petersburg Stephen injured his shoulder while helping to tear up the Weldon Road railroad tracks. He completed his time in the service and was discharged June 21, 1865 in Bladensburg, MD. After he returned home in 1865 he purchased an additional 63 acres adjacent to his cabin site from the Holland Company using his $200 Army Bounty money for down payment. In 1867 he built a one story house measuring 19’ by 31’. His wife and children picked blackberries for sale in order to purchase the hardware, nails, latches and hinges for the house. Stephen continued to farm his property until 1905 when he retired and moved into the Village of Ellicottville. He and his wife raised 9 children to adulthood, five daughters and four sons. Stephen joined the GAR and was active for many years. Stephen passed away May 30, 1909 and is buried in the Sugartown Cemetery in Great Valley, NY. Courtesy of Charles R. Pettit