CAMP members held a ceremony that honored all veterans at the Cattaraugus County Memorial and Historical Building on Veterans Day, November 11, 2015. The Olean Times Herald published an article about the ceremony on November 12, 2015. Please go to the Memorial in the News page of this web site to read the article.

Immediately following the Cemetery Ceremony, CAMP will hold a brief ceremony at the Cattaraugus County Memorial and Historical Building located at the corner of Court and Seventh St. in Little Valley. The public is encouraged to attend both ceremonies.

CAMP’S ceremony will include:

3) Reading of the Clark Casler poem

4) Any other appropriate remarks anyone in attendance cares to make.

An Honor Guard of 3-4 Uniformed Civil War re-enactors will also be present. 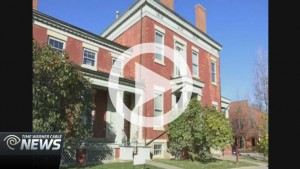 Each year these 5 properties become priority projects for the Landmark Society who will work collaboratively with owners, municipal officials and developers to facilitate investment and foster rehabilitation. The ultimate goal is to return important historic resources to a place of prominence in their respective communities, as economic and social assets that spark even more investment and revitalization.

Wayne Goodman, Landmark’s executive director, stated at the hour-long press conference that “This is the third year we are announcing a ‘Five to Revive’ list, which has been very effective in calling attention to key properties in Western New York that are in need of investment.” That was certainly music to the ears of Citizens Advocating Memorial Preservation (CAMP) members who attended the press conference.

The Landmark Society has been with CAMP since the first voices of protest were raised against demolition of the Memorial Building in Little Valley, NY in October of 2013. CAMP realizes that its efforts would have gone nowhere without the expert professional help from the staff at the Landmark Society.

CAMP members Nancy Bargar, Rose Mary Carvella, Warren Patterson, Gail Bellamy, Cyndy Whited, John Stengel and Tom Stetz were among a crowd of 30 attendees at the Landmark press conference.  They all were in agreement that this was another very important step on the long march towards preservation and reuse for Cattaraugus County’s most significant Civil War Memorial.

The event was also attended by a representative from US Senator Charles E. Schumer’s office and by Clinton Brown of Clinton Brown Company Architecture. And the press conference was recorded by a Rochester, NY television station crew for news broadcast later in the day. 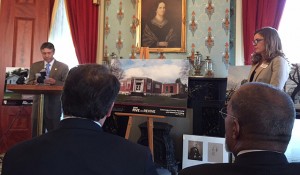 Landmark Society Executive Director Wayne Goodman announcing the lisiting of the Memorial Building as one of the Five to Revive with LSWNY Preservation Planner, Caitlin Meives 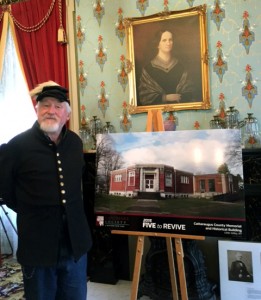 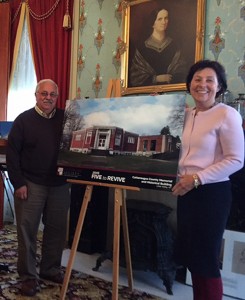 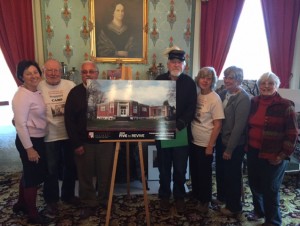 CAMP has received 9 responses from a field of 26 Legislative Candidates.

The last of the candidates’ responses appear below:

Dear Tom,
I am writing to you in response to your letter regarding the Civil War
memorial in Little Valley. I was unaware until I tried to do a little
research on this that the memorial was scheduled for demolition. What
information I was able to get did not really touch on the extent of damage
or needed repair to keep this landmark intact. I am surprised that little or
no effort is being put forth to keep it and or reuse it.
I am interested in exploring avenues to preserve this as a historic
landmark. I believe with a coordinated effort this should be able to be
preserved for what it was intended to be, a memorial to Civil War soldiers
and Sailors. I am curious if you could tell me what avenues have been
explored and what responses has your group gotten? As someone who grew up in
this area and spent most of my adult life here I have to admit until I got
your letter I was unaware of this memorial. It’s a shame it has been so
neglected.
I think at this time I would have to say that I am in favor of
Cattauragus County working with C.A.M.P. and other organizations to
preserve, rehabilitate and maintain the Memorial Building.
Thank you so much for contacting me on this issue. 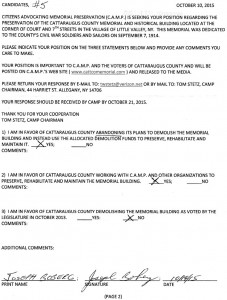 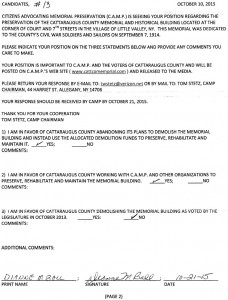 So far, CAMP has received only 6 responses from 27 Legislative Candidates. The deadline to respond to CAMP’s poll is tomorrow, October 21, 2015. 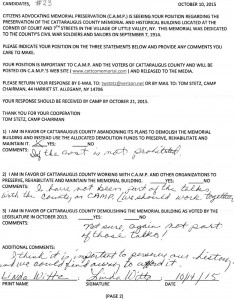 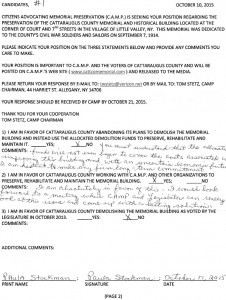 A real-photo postcard has been discovered and purchased by CAMPer, Kyle Stetz, that pre-dates the dedication of the Cattaraugus County Memorial and Historical Building in Little Valley, NY. The postcard is postmarked May 21, 1914.

The postcard was mailed from Little Valley, NY almost 4 months before the dedication of the Memorial Building that took place on September, 7, 1914. The card contains a real photo of the building rather than an artist’s rendering. The detail is very good as a result. The front and back of the postcard are displayed below: 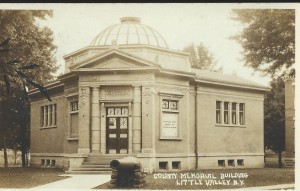 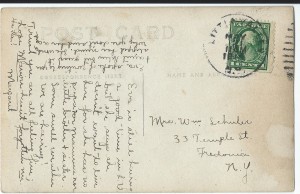 We will post other responses from other Legislative Candidates as they come into CAMP Chairman, Thomas Stetz. 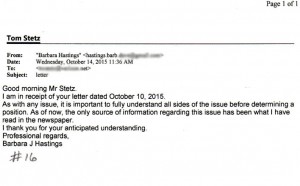 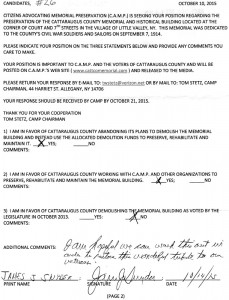 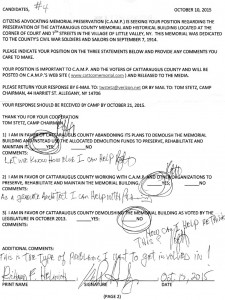 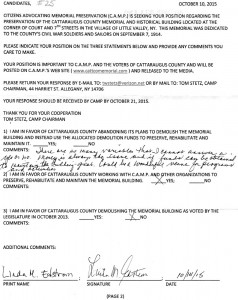 The candidates have been asked to reply to CAMP by email or mail by October 21, 2015. Their individual responses will be posted on CAMP’s web site and will be released to the media.

This is a copy of the letter that was mailed to each candidate:

TO ALL CANDIDATES FOR CATTARAUGUS COUNTY LEGISLATURE IN THE NOVEMBER 3, 2015 ELECTION:

CITIZENS ADVOCATING MEMORIAL PRESERVATION (C.A.M.P.) IS SEEKING YOUR POSITION REGARDING THE PRESERVATION OF THE CATTARAUGUS COUNTY MEMORIAL AND HISTORICAL BUILDING LOCATED AT THE CORNER OF COURT AND 7TH STREETS IN THE VILLAGE OF LITTLE VALLEY, NY. THIS MEMORIAL WAS DEDICATED TO THE COUNTY’S CIVIL WAR SOLDIERS AND SAILORS ON SEPTEMBER 7, 1914.

PLEASE INDICATE YOUR POSITION ON THE THREE STATEMENTS BELOW AND PROVIDE ANY COMMENTS YOU CARE TO MAKE.

YOUR POSITION IS IMPORTANT TO C.A.M.P. AND THE VOTERS OF CATTARAUGUS COUNTY AND WILL BE POSTED ON C.A.M.P.’S WEB SITE ( www.cattcomemorial.com ) AND RELEASED TO THE MEDIA.

YOUR RESPONSE SHOULD BE RECEIVED BY CAMP BY OCTOBER 21, 2015.

THANK YOU FOR YOUR COOPERATION,

1) I AM IN FAVOR OF CATTARAUGUS COUNTY ABANDONING ITS PLANS TO DEMOLISH THE MEMORIAL BUILDING AND INSTEAD USE THE ALLOCATED DEMOLITION FUNDS TO PRESERVE, REHABILITATE AND MAINTAIN IT.   ______YES;              ______NO