The Cattaraugus County Strategic Planning Committee, tasked with investigating the Memorial Building issue, has scheduled a meeting with CAMP for June 22, 2016 (Wednesday) at 4:30 PM  at the County Center in Little Valley, NY following their regular Legislature meeting.  The meeting with CAMP will be held in the 3rd floor large caucus room.  All are invited to attend the meeting.

CAMP was blessed by good weather and a good turnout for the 2016 Memorial Day Ceremony that took place at 11 AM on May 30th, 2016. Thank you to all of the volunteer, parade and ceremony participants who helped to make this a successful day! A video of the entire ceremony will be published as soon as possible on the CAMP Videos page. 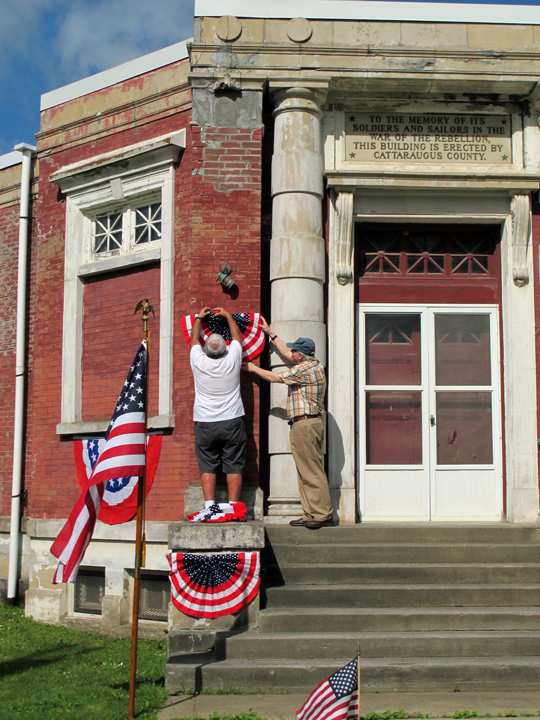 Tom Stetz and Clark Casler putting the finishing touches on the Memorial Day Decorations for the 2016 CAMP Memorial Day Ceremony. 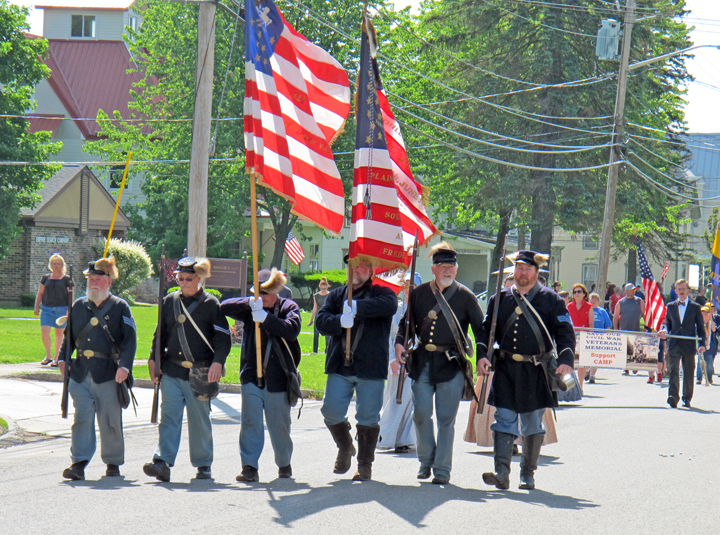 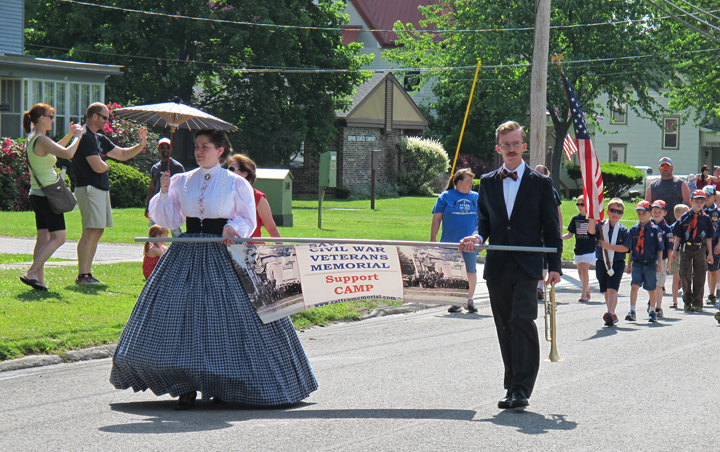 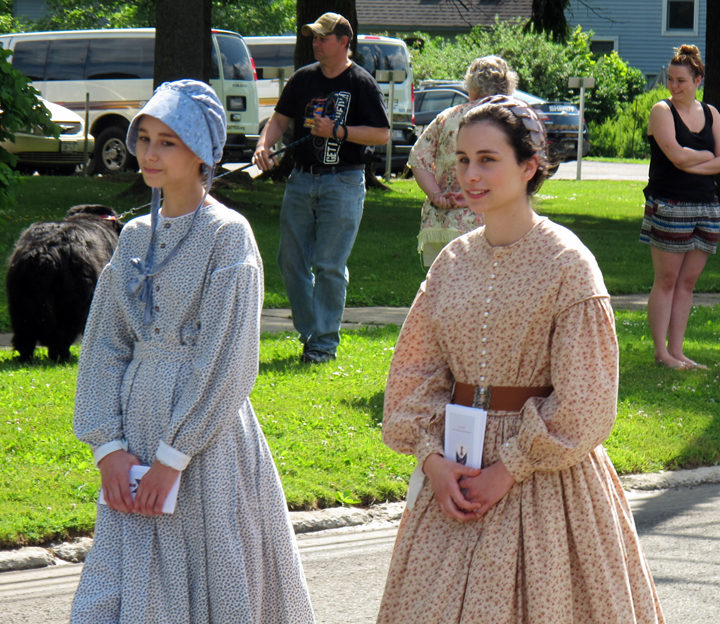 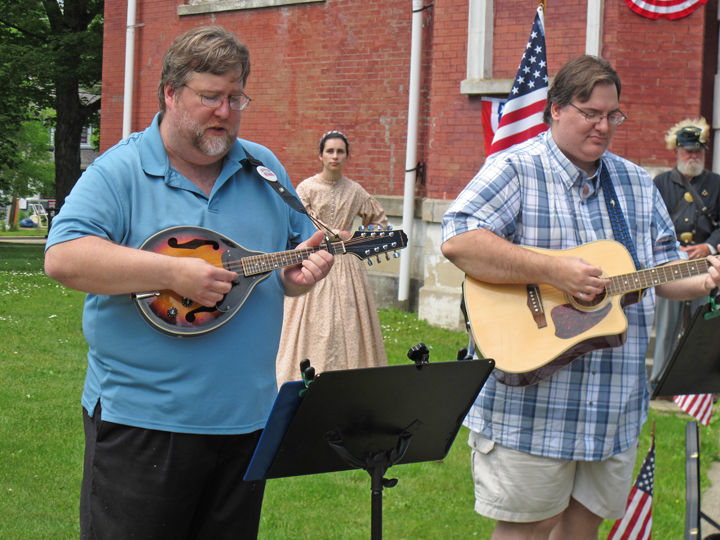 Scott Frank on Mandolin and Matt Englert on guitar of “Rush The Growler” played the Star Spangled Banner and several Civil War tunes at the 2016 CAMP Memorial Day Ceremony. 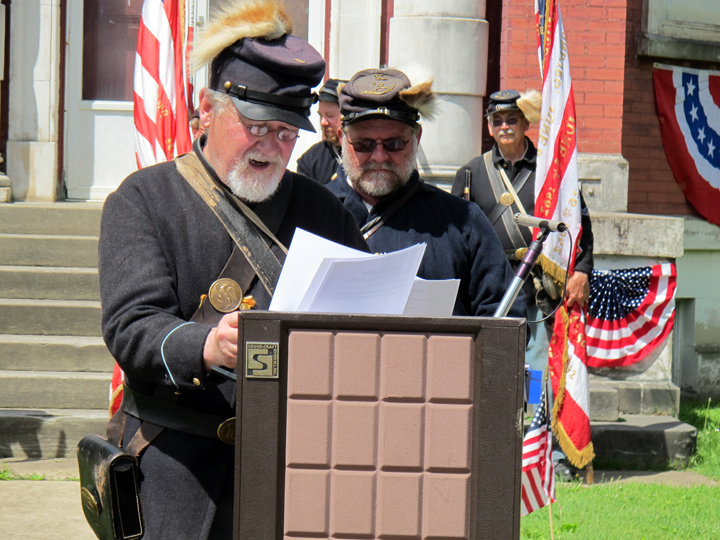 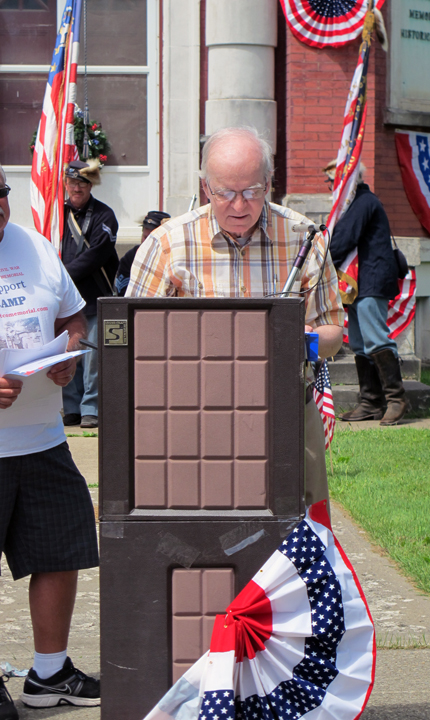 Clark Casler honoring fallen soldiers from the War of 1812 and WWI at the CAMP 2016 Memorial Day Ceremony. 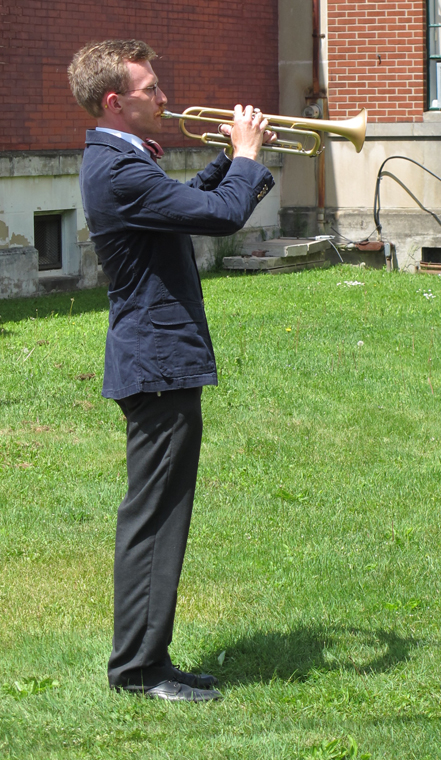 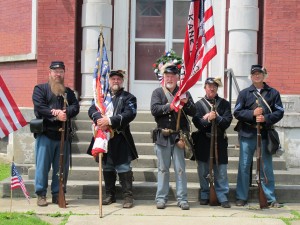 Citizens Advocating Memorial Preservation (CAMP) will hold a Memorial Day Ceremony on Monday May 30, 2016.  The ceremony will take place at the Cattaraugus County Memorial and Historical Building located at the corner of Court and 7th Streets in the Village of Little Valley. 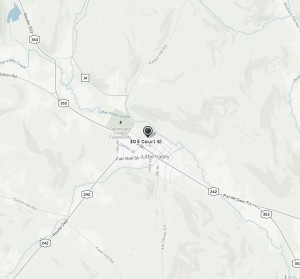 CAMP members realize that it is almost impossible to personally thank everyone who supported them on the issue of the proposed demolition of the Cattaraugus County Memorial and Historical Building in Little Valley, NY. However, none of you should go unrecognized for your contribution to our efforts on 12-9-15 for a vote against demolition by Catt Co legislators. Your support through emails to legislators and through your presence at the Cattaraugus County Center Building was vital in convincing the legislators that the demolition of a rare Civil War Memorial Building was not the right thing to do.

Thank you for Standing with Us and Raising your Voices in Protest!

CAMP looks forward to working with Cattaraugus County in a concerted effort to preserve this important Civil War memorial in 2016. Your continued support will help to make that possible.

This article from the Olean Times Herald says it all. CAMPers are floating on air today!

LITTLE VALLEY — In an about-face from last week, the Cattaraugus County lawmakers failed to muster enough votes to bring a resolution to the floor seeking bids to demolish the Civil War Monument and Historic Building.

Members of Citizens Advocating Memorial Preservation (C.A.M.P.), who had attended the work session to talk about preserving and reusing the building, were flabbergasted.

A roll-call vote on whether to bring the resolution to the floor fell short of the needed two-thirds vote of the legislators.

All six Democrats, Conservative Matthew Keller of Olean, and Legislature Chairman Norman Marsh, R-Little Valley, voted to bring it to the floor, while the remaining 13 Republican legislators voted against it.

“By not letting this resolution come to the floor” at the last meeting of the year, “it automatically dies,” Snyder pointed out.

Snyder proposed that in the coming year legislators “work with C.A.M.P.” to explore the possibility of preserving the building.

“It’s too early to pull the plug yet,” he said.

C.A.M.P was formed last year after some county residents, including descendents of thousands of county residents who were members of the 154th Regiment that fought in the Civil War, learned the monument was to be demolished.

Legislator William Sprague, D-Yorkshire, who favored demolishing the building, said this amounted to “kicking the can down the road.”

Linda Edstrom, R-Olean, who will not return to the Legislature next year, said there were many issues that were not discussed.

Carl Edwards, R-Limestone, who also will not be returning next year, said the issue was “mishandled” and that voting to demolish it “would have been a prime example of bad government.”

Thomas Stetz of Allegany, chairman of C.A.M.P., put away the speech he’d written and expressed thanks for giving the group more time to try to preserve the 101-year-old building.

He said the monument has been placed on the Landmark Society of Western New York’s “Five to Revive” list and was a candidate for the New York State Preservation Society’s “Seven to Save” list.

Public Works Committee Chairman William Weller, R-Franklinville, who was one of the 14 sponsors of the resolution to seek bids for demolition, said he had a change of heart when new information was received on Tuesday.

“I thought we needed more dialogue with those folks,” he said. “Before, we felt these folks couldn’t accomplish it. Maybe these folks will have a chance.”

A communication from State Sen. Catharine Young, R-Olean, suggested a $200,000 grant could be used to “mothball” the monument until funding can be raised to renovate and preserve it.

That grant could make a difference in the outcome of whether to preserve the monument, Weller said.

Meanwhile, Lamberson, the Allegany Democrat who said Republicans asked to read the “talking points” at the Dec. 3 Public Works meeting, said he was left “hung out to dry” with the vote. “It was their idea,” he said. “They came to me.”

Lamberson noted, “Eighteen people said they wanted it down” last week. “I doubt much will be done with it.” He said he remains opposed to spending county money to preserve the building.

Stetz said he was surprised at the turnaround, but that it was a good surprise.  “Apparently they got flooded with mail,” he said. “They realized the best thing to do is talk. We feel restoration and preservation is best and hopefully, affordable.”

With the $200,000 in historic preservation funding Young suggested and the $175,000 the county had budgeted for the building’s demolition, that’s almost half of what Clinton Brown Co. Architecture of Buffalo had estimated it would cost for renovations.

County estimates are closer to the $1 million range.

“We blocked it,” Snyder said afterward. “It takes a two-thirds vote to get it on the floor for debate and we blocked it. It got too contentious in too short a time.”

CAMP will stage the group of spectators for the meeting in the lobby of the County Center Building that is just past the security checkpoint at 2:30 PM.

PLEASE JOIN US IN SUPPORT OF THE MEMORIAL BUILDING AND THE VETERANS TO WHOM  IT WAS DEDICATED ON SEPTEMBER 7, 1914.

To: (all Catt Co Legislators)

Subject: THE POWER OF ONE

Each of us has the power to be a hero. My great-grandfather, Allen Williams, enlisted to fight for the Union and left his home in Cattaraugus County in 1862.   He and 3000 other county men set off to a very dangerous and uncertain future. Each of them took a vow to protect and save our country. Many never returned.

Allen was a member of the 154th New York Infantry Volunteers. He fought in Gettysburg where many in his regiment were lost. Fortunately, he survived, and went on to fight at the battle of Rocky Face Ridge in Georgia.

The Union forces were attempting to gain control of Dug Gap, a steep rock strewn mountain. The Confederate forces had the advantage of being in control of the summit. Boulders and rocks were rolled down upon the Union troops as they dodged the Minie balls fired from above.

The regimental flag bearer struggled to lead the 154th up the daunting hill.   As he neared the summit that man was shot and killed. A second man leaped to keep the flag from falling and was immediately wounded. A third soldier took the flagstaff and pushed forward again, only to sustain a serious wound. Allen grabbed the flag and continued up the incline, with the regiment behind him, successfully planting the flag at the summit.

He was later promoted to sergeant and given the flag to carry for the rest of the war. He marched with Sherman to Atlanta, and took part in the victory parade in Washington. Fortunately he returned home.

In 1914 the Memorial and Historic Building in Little Valley was dedicated by Cattaraugus County to honor all those men who had shown their courage and patriotism in the war. It is a unique octagonal building with an ornate tile floor and had a glass dome that allowed the sun to shine on the memorial plaques for all the fallen comrades. Those still alive attended the ceremony, knowing that the community had shown its love, appreciation and admiration.

There is an opportunity for you to again allow the sun to light the tiles in the Memorial. Many in the county, and well beyond, are hoping that you will step forward and support the effort to save and renovate the Memorial with your leadership. Please be a sunbeam and a hero. There are many of us who will follow the flag up the rocky hill with you. 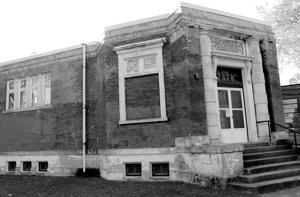 LITTLE VALLEY — The chairman of the group hoping to save Cattaraugus County’s Civil War Monument and Historic Building from the wrecker’s ball is asking supporters to attend Wednesday’s Cattaraugus County Legislature meeting.

The building was dedicated 101 years ago as a memorial to the county’s Civil War soldiers.

Tom Stetz, chairman of Citizens Advocating Memorial Preservation (C.A.M.P.), issued a statement Sunday asking local supporters of the group’s efforts to save the 101-year-old Civil War memorial to come to Wednesday’s meeting, when county lawmakers are expected to vote to demolish it.

“The legislators plan to take a vote to move forward with the demolition of the Cattaraugus County Memorial and Historical Building, a memorial owned by the county and dedicated by the county on Sept. 7, 1914 to its Civil War veterans,” Stetz wrote.

“Citizens Advocating Memorial Preservation is asking anyone, who believes a vote to demolish this veterans’ Memorial is not the action the county legislators should take, to attend the 3 p.m. meeting on Wednesday.”

C.A.M.P. officials, who have sought to preserve the Civil War memorial for more than a year, expected last week’s work session would address questions they raised over the past two months, including a C.A.M.P.-sponsored architectural survey of the building and its possible future uses.

The Landmark Society of Western New York, which matched C.A.M.P.’s $2,500 contribution toward a study by the Buffalo architectural firm Clinton Brown Co. Architecture, recently named the Civil War Memorial and Historic Building to its “Five to Revive” list of significant buildings in the region that merit preservation.

Stetz, who along with other C.A.M.P. officials was flabbergasted when he heard the word “demolish” last Thursday, said the group was “blindsided” by the consensus decision that was not done in a public forum.

The group had asked legislators to commit to the building’s preservation and allocate the $175,000 set aside for its demolition to preservation efforts.

Landmark Society officials estimated historic interior renovations could be made for less than $600,000 and urged the county to seek additional grants.

County officials insisted the renovations would cost closer to $1 million.

That changed abruptly Thursday, when Legislator Richard Lamberson, D-Allegany, rose to read “talking points” that had been agreed to the day before in a closed-door meeting of the Public Works Committee. Halfway through the list, Lamberson said a majority of the Legislature agreed to demolish the building instead of continuing to work with C.A.M.P. for its preservation.

It is my hope that when you have your next meeting on December 9,2015
that you will not vote to demolish the Civil War memorial building in
Little Valley.

There is nothing I can do and very little I can say that will change (your)
mind as it appears you are set to start the demolition.

Please keep this in mind.  Many people in the community probably are
oblivious to the memorial and what it means.  One generations effort to
never to forget is another generations wrecking crew.  Never is a very
long time.

Please find it your conscious to keep this memorial a living memorial
to the Boys in Blue.